MULTI-TIP PUNCHES AND THEIR IMPACT ON COMPRESSION FORCES

Multi-tip punches are a cost-effective way to increase tablet output without the need for additional tablet presses. The use of multi-tip punches follows a similar principle as a single tip tool for the rotary tablet press but there are operating techniques that must be understood for a successful tableting process

This article and case study will point out the critical stages of the rotary tablet press process, describe what impact multi-tip punches have at each step, and how to overcome the common challenges found in the tablet compression industry.  Data will also be provided to address the impact multi-tip punches have on compression forces. There are six areas of concern during the tableting process in which multi-tip punches are directly affected. Each of these areas may need to be addressed when moving from a single tip to a multitip punch set up. 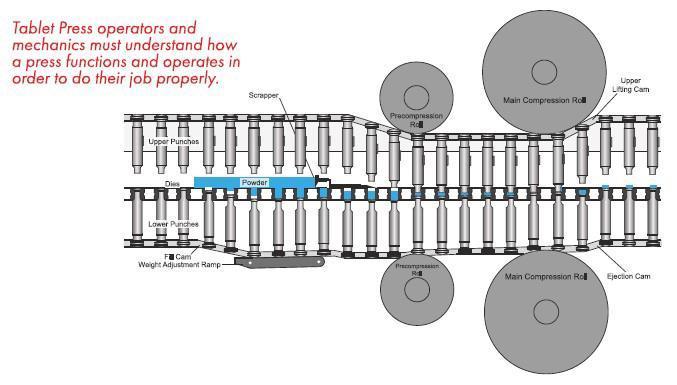 A series of experiments were conducted to study the compression force impact from a single-tip, two-tip and fourtip 0.25” (6.35mm) round tool. The tools are illustrated in Figure 1. A direct compression blend consisting of 25% w/w of APAP and 74.5% SMCC 50 with 0.5% magnesium stearate was used for the study. A compaction profile study was performed on a bench-top rotary tablet press at 25RPM turret speed. Tablets were collected at varying force levels for each tool configuration. Resulting tablets were measured for thickness, weight, and breaking force. Figure 1 depicts the compaction profile for the three tools. It is clear the compression force of multi-tip tooling must increase to achieve the same tablet breaking force as the number of tips are increased. One might think that since the area of the tool has doubled, it would require twice the force to achieve the same tablet breaking force as is illustrated in Figure 2, but this may not be the case. Figure 3 is the compaction profile normalized for the tablet geometry and punch tip area. This gives a clearer picture of the resulting tablet strengths at different applied compaction pressures.

If in fact the force is doubled when the tool area is doubled then the plots would superimpose. At the same compaction pressure, the 2-tip tool configuration results in a 19% increase in tablet strength, and another 19% increase in strength from a 2-tip to a 4-tip configuration. In this case study, the applied pressure or compression force would be less than double to achieve the same tablet strength.

Ejection After the tablet is compressed the ejection cam will push the lower punch upward to eject the tablet. The ejection force is a combination of the residual radial die wall and coefficient of friction between the tablet belly band surface and the die wall surface. Excessive ejection force levels will cause premature wear to the lower punches, cams and may cause visual striations on the tablet’s belly band. Multi-tip punches increase the belly band surface due to the increased number of tablets. This inherently increases ejection force levels and the likelihood of having the aforementioned issues. Common ways to reduce the ejection force includes increased levels of powdered lubricant to the formulation (i.e. magnesium stearate), tapered dies and lined dies of different materials.

What Impact Do Multi-tip Punches Have on Ejection Force? As previously mentioned, as the number of tips are increased on the punch, the number of tablets ejected also increases and an increase in ejection force is expected. If the contact area is doubled, one would assume the force would be doubled as well. The results are depicted in Figure 4. The results clearly show a significant increase in ejection force with the increased number of tips but it is not doubled or linear. The properties of the powder play a major role in the ejection forces. When lubrication is excessive the ejection force will not increase with increased compression force since the friction is reduced. This profile finds value in the development arena where lubrication can be optimized. Lower levels of lubricant can reduce capping potential, improve tablet strengths and disintegration/dissolution times.

Tablet Take Off   The final step on the rotary tablet press is the tablet take-off or tablet removal from the lower punch face. Common problems associated with tablet take off are sticking and picking issues. There are many techniques available to remediate these issues including steel composition, punch face coatings, and logo designs, but when dealing with multi-tip punches the punch overall length is of particular importance. Most tablet presses are designed so that the lower punch tip is flush with the top of the die table to ensure a smooth tablet removal process. Some presses are designed to protrude the lower tips at 0.5mm or more. If the overall lengths are not consistent within a set of punches the tablet removal process may have issues with the tips damaging the take-off bar or even the leading edge of the feeder. If the punch tip is slightly below the die table surface the tablet might fracture at the take-off bar. For multi-tip punches, it is favourable to provide a flush tip situation versus a slightly protruded tip since the latter can cause tablet damage from the trailing protruded tips contacting the leading tablets that were removed from the take-off bar.

Conclusion This study provides some intriguing information about the necessary compression forces for multi-tip tooling. As manufacturers often look to reduce costs and increase productivity, wear on tablet presses and tooling can be a concern. With the potential ability to reduce some compression forces necessary to produce quality tablets, opponents to multi-tip punches may have one less reason to be concerned. A full understanding of the available options and the impact they have on the rotary tablet press are key to successful manufacturing. If you are considering multi-tip punches, be sure to work with a reputable tooling manufacturer to discuss all options and determine what solutions will work best for your company. Natoli Engineering Company, Inc., is the world-renowned leader in tablet compression tooling, support products, and services. Founded on the uncompromising principle to manufacture and deliver the highest quality products at a fair price with exceptional customer service, Natoli continues to build on a half century of innovation and industry leadership.

DOES NOT COMPUTE : When and how Pharmaceutical Automation fails more…

Your Partner for Improved Production Performance