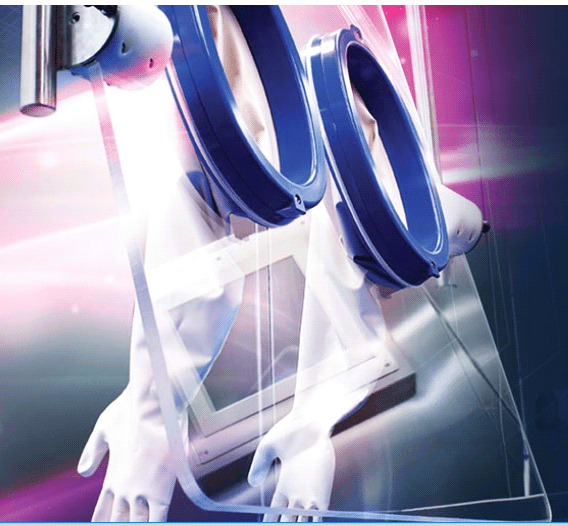 This article describes the basic concepts of isolators, type of isolators in pharmaceutical industry, transfer mechanisms, handling of isolators and finally short synopsis about decontamination cycle in isolators.

Isolators are a core component to the pharmaceutical industry, critical for a range of processes. These gas-tight enclosures provide a complete barrier to ensure aseptic conditions and containment.

Isolators have been around in the pharmaceutical industry since the early 1980s and in the nuclear industry (glovebox technology) since the 1950s.

The design of isolators is to create an airtight barrier or enclosure around a piece of equipment or process which provides outright separation between the operator and product. The operator can execute tasks through half-suits or glove ports. 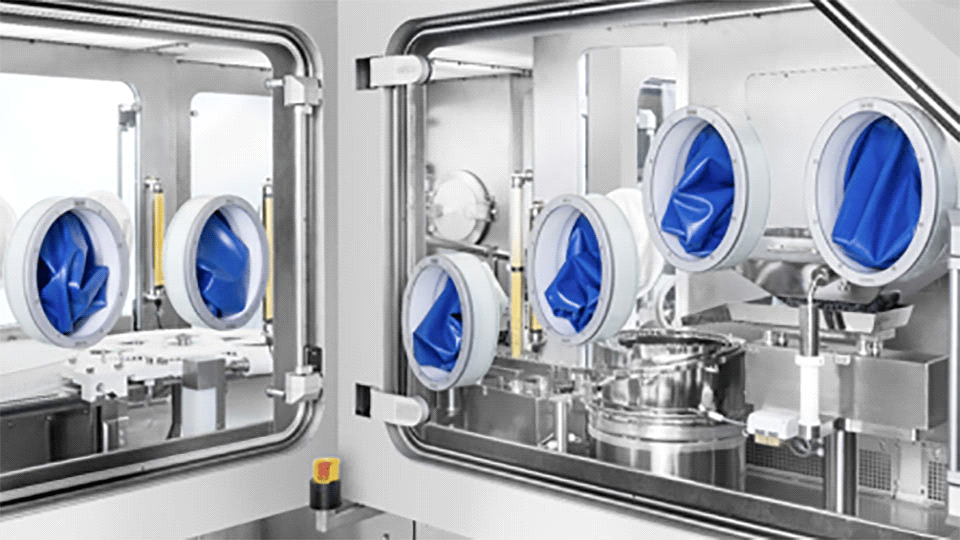 An isolator is an arrangement of physical barriers that are integrated to the extent that the isolator can be sealed in order to carry out a routine leak test based on pressure to meet specified limits. Internally it provides a workspace, which is separated from the surrounding environment. Manipulations can be carried out within the space from the outside without compromising its integrity.

Basic Working Principle/Design of Isolator:
Aseptic isolators should be free of microorganisms out of the environment and therefore need to operate under positive pressure air delivered through HEPA filters. However few isolators will work on negative pressure also. (Figure:1) 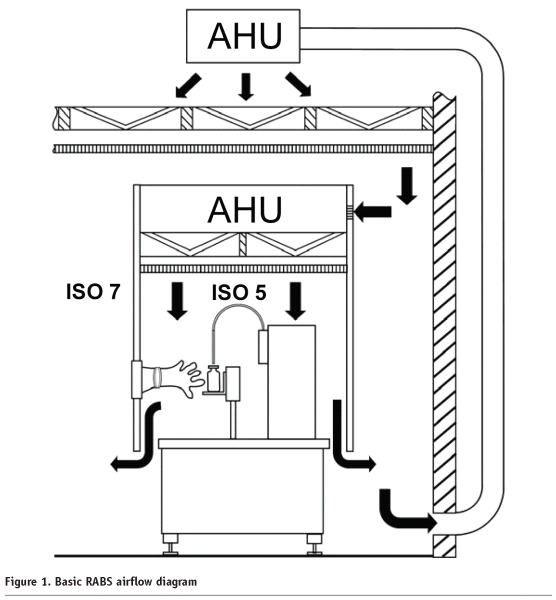 Generally this pressure is 0.25 inches of water column, but can be raised or lowered as the process requires. Isolators need to be periodically leak tested to ensure their integrity and prevent escape of the decontamination agent. Leak testing can be done by various methods including pressure decay or chemical detection.

Construction of Isolators
Aseptic isolators can be constructed using both flexible materials as well as rigid materials. Flexible wall isolators use clear plastic film (usually PVC) at a variety of thicknesses. These isolators are lighter weight, offer good visibility, and are easy to set up. 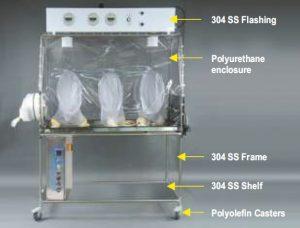 Rigid wall isolators are generally made from 316L stainless steel for the enclosure and laminated safety glass for viewing windows. While these isolators are heavier and take more time to install, they are more durable, do not absorb decontamination agents, which result in fast decontamination cycles, resist chemical agents, lend themselves to unidirectional airflow, and are easier to leak check than flexible wall isolators. Rigid wall isolators (Figure: III) can be used for any isolator system, especially filling machines, sterility testing, compounding and filtration, isolator systems. Where a mock-up of the design is preferred. 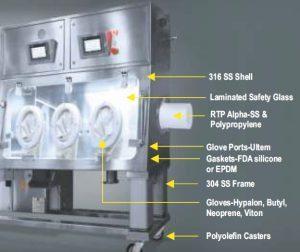 Handling of Isolators
Handling inside of isolators is done via glove ports or half-suits. For aseptic applications, glove
assemblies are generally comprised of two pieces. This means the sleeve and glove are separated by a wrist connector. This allows the glove to be changed in-situ. Glove ports can be round or oval and are made from widely ranging materials depending on the manufacturer. A molded port with insert cover presents a crevice free sleeve inside the isolator and is highly cleanable.

Reach inside the isolator is limited due to the length of glove sleeves. When more reach or range of motion is required, a half-suit is employed. This is often the case with isolators that interface with autoclaves, ovens, and lyophilizers but, are also used in sterility testing. Half-suits utilize an independent ventilation/filtration system which delivers HEPA filtered air between the two layers of the half-suit. The use of glove ports or half-suits (Figure: IV) allows the operator to be physically within the system, but “biologically” removed from it.

RTP systems (double door transfers)
RTP’s are used to enter into the isolator or remove items from the isolator without breaking the “sterility” of the isolator. The RTP system is made of the two parts typically called the alpha flange and beta flange. The beta flange is rotated 60° clockwise which engages both door halves together. The operator will open the combined flanges inside the enclosure via the glove ports or half-suit. The gaskets on the flanges seal the two door halves together and the beta flange to the alpha flange (Figure: V). 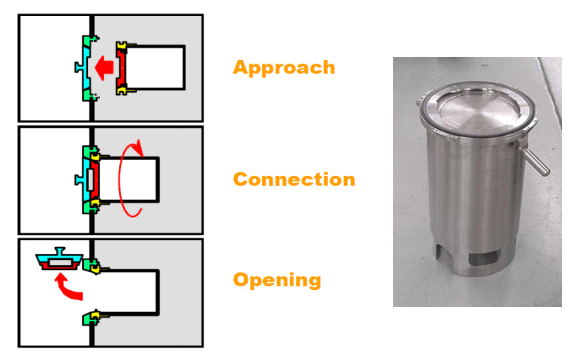 Efficacy of Cleaning and Disinfection in Isolators

Efficacy of Cleaning
Cleaning serves to eliminate residues of the products manufactured or used. There are two approaches to cleaning:

The products are soluble in a solvent and are eliminated by dilution. In order to increase the solubility of products, surfactants and co-solvents can be added. The products are not soluble or are too hazardous to be handled as they are. A suitable chemical product is used to neutralize them or make them soluble.

The efficacy of a cleaning operation is dependent on several factors including:

Acceptable residue limits (product manufactured, detergents, possible breakdown by-products of the product) on critical surfaces (direct or indirect contacts with the product), after cleaning, must be established and justified on the basis of a risk analysis and then validated. e.g.: Weighing, handling and formulation preparation isolators. The acceptable limits will take into account in particular the subsequent bio-decontamination, the risks of cross contamination between products, and the toxicity for maintenance operators. An analysis method specific to the residues (such as HPLC coupled with mass spectrometry, or mass spectrometry) is preferable to non-specific general methods (TOC, etc.)

Leak test in Isolators
Isolators are frequently leak tested by a test known as the pressure decay test. Pressure decay may be reported in a variety of forms but the most common form is Percentage Volume Change per Hour. This volume change is actually a volume loss in positive pressure isolators and a volume gain in negative pressure Isolators.

The Percentage Volume Change per Hour is the volume of air leaked out of or into the isolator during the period of the test, expressed as a percentage of the total volume of the isolator per hour.

What guidance says?
According to ISO 10648-2, ‘The leak rate is measured at the normal operating pressure (usually about 250Pa) for checking during operational use, and 1000Pa for the acceptance test’. These test values are not generally appropriate for pharmaceutical isolators for routine testing. According to the Pharmaceutical Isolator Yellow Guide and PHSS Technical Monograph, “It is suggested that test pressure should be a minimum of (1.5 x working pressure) but may be higher (2x) depending on the design and application of the isolator”.

Leakage is tested using an automatic pressure loss test, during which a defined positive pressure is generated in the isolator segment in contrast to the installation room and the loss of pressure is observed for a certain time. The isolator’ tightness has to ensure a leak of air volume in 1 hour ≤ 1%. The leakage percentage is calculated as percentage of the volume of the isolator in one hour by the following formula

The leak test is usually executed before the VHP decontamination cycle to ensure the isolator is air-tight, including the ducts until the exhaust/return valve.

To make it easier, let’s give an example:

Consider to calculate % of leak rate. 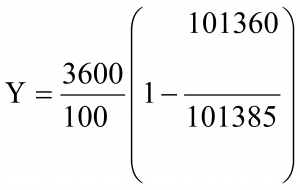 Decontamination of Isolators
Today’s isolators are decontaminated primarily with hydrogen peroxide delivered as either a gas or a condensing vapour depending on the type of generator selected. Chlorine dioxide is also used, but is not that common. Hence isolators are most commonly sanitized using hydrogen peroxide vapor (a surface disinfectant). Isolators are said to ‘disinfect’ or to ‘sanitize’ rather than ‘sterilize’ because absolute sterility cannot be demonstrated. Sanitization, in this context, describes the reduction of a number of microorganisms within the clean environment as demonstrated through the use of biological indicators in validation studies for different isolator cycles.

Three successive, successful cycles as a part of cycle development resulting in no remaining spores constitute a validated cycle. Aeration of the enclosure should also be validated. Typically add 20–25% to the validated exposure time to account for potential system variability. However, we must document the level of sterilant residue that will not negatively affect the process. 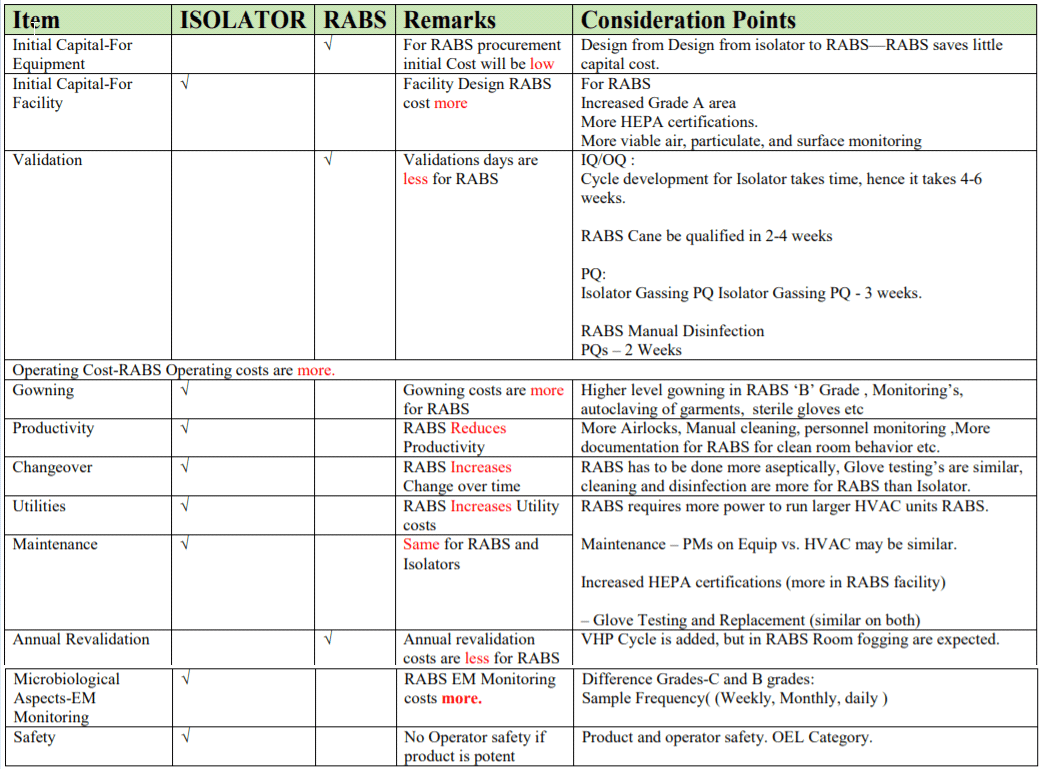 RABS may be considered an attractive solution for retrofits of active solution for retrofits of existing lines, but will not replace isolation technology. Isolators and RABS will evolve as a pieces of process equipment with a defined set of functions and requirements RABS utilizes some of the advantages of isolation technology but not all of them.

There are many benefits to using isolator technology for aseptic processing. Separating the operator from the process/product results in greater product quality and operator safety. Since 1998, the use of isolators for aseptic filling has seen a steady growth worldwide. Sterility test isolator use continues to be one of the more frequent uses of isolators. With the need to formulate and fill more potent products aseptically, the use of isolators will continue to grow.

With the drive toward improved technology and better solutions for aseptic processing, many RABS stand far short of the capabilities of isolation technology and will likely be used in the future for only specific/narrow applications. Sporicidal agents delivered into the isolator as part of a validated system provide a much higher sterility assurance than in a cleanroom, which is typically disinfected manually. The future may include automated or robotic systems to perform sterility testing or handle extremely potent or radioactive products to eliminate operator interaction through gloves. Hence isolator technology is preferred in this current good manufacturing practice.

Track and Trace in the Pandemic more…