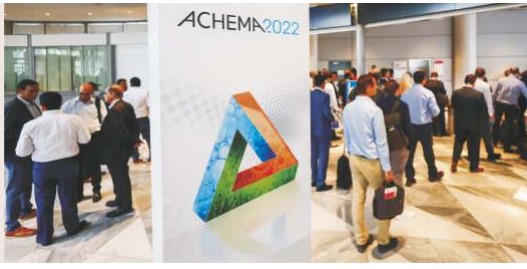 At ACHEMA 2022, the world’s leading trade show for the process industry, over 2,200 exhibitors from more than 50 countries showcased the latest equipment and innovative processes for the chemical, pharmaceutical and food industries at the Frankfurt fairgrounds from 22 to 26 August.

The exhibition group “Pumps, Compressors, Valves and Fittings” comprised the most exhibitors at ACHEMA 2022, followed by “Pharmaceutical, Packaging and Storage Techniques” and ” Instrumentation, Control and Automation Techniques”. A new addition to the exhibition group is the “Digital Hub” as a central meeting place for digital experts and players in digitalization. 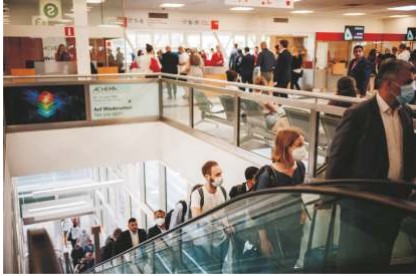 After Germany (1,042 exhibitors), Italy (179 exhibitors) and India (143 exhibitors) showed the largest exhibitor participation. Despite existing travel restrictions, 74 exhibitors from China also took part in ACHEMA 2022. At 52.9 %, the foreign share on the exhibitor side remained at an unchanged high level.

Whether it was laboratory or pharmaceutical technology, plant engineering or classic process technology, the stands in the halls were well attended and the fairgrounds were bustling with activity. “The need for personal exchange is huge after such a long time. The exhibitors we spoke to and we ourselves had a successful trade show, where we held numerous discussions with direct project or investment relevance,” confirms Jürgen Nowicki, Chairman of the ACHEMA Committee and CEO of Linde Engineering.

Dr Thomas Scheuring, CEO of DECHEMA Ausstellungs-GmbH, is also very satisfied: “We had to fight like never before for the success of this very special ACHEMA. The fact that, despite all the headwinds, we nevertheless succeeded in creating an ACHEMA that exceeded the expectations of the vast majority of our customers makes us happy and proud – and at the same time is a credit to our team and all the exhibitors who have remained loyal to us.”

“We also live up to ACHEMA’s claim to be the world’s leading trade show for process technology,” adds Dr Björn Mathes, Member of the Executive Board of DECHEMA Ausstellungs-GmbH. In addition to 2,211 exhibitors from 51 countries, more than 70,000 participants from 127 nations attended this year’s ACHEMA. Approximately every second attendee at the trade show came from abroad. 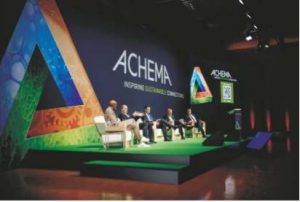 The three focal topics of ACHEMA 2022 also met with great interest. At the “Digital Lab”, the smart laboratory of tomorrow could be experienced at the stands in the field of laboratory and analytical technology and at the associated action area.

Many new developments in the exhibition halls took up the focus topic “Modular and Connected Production”: The trend towards designing production lines in the chemical and pharmaceutical industry with the greatest possible flexibility and fully networking them was reflected in numerous innovations on the stands in the different exhibition groups. 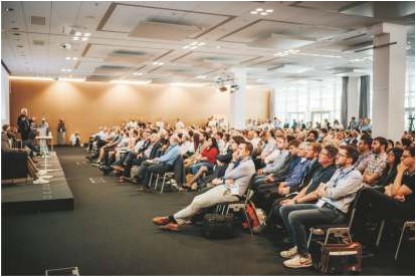 With “Product and Process Security”, ACHEMA 2022 also took up the topic of digital security, which is becoming increasingly important for many companies in times of industry 4.0, networked production and in view of the high threat level posed by cyberattacks: Over 330 exhibitors presented their products and services on this topic, which also forms the link to the new “Digital Hub” exhibition group.

The complete integration of the ACHEMA Congress into the exhibition was very well received. In the congress programme, the hydrogen topics as well as lectures on sustainability, the circular economy and digitalisation met with particularly great interest.

“The dovetailing of congress and exhibition is a complete success: with more than 20,000 listeners, the attendance figures are significantly higher than at the last ACHEMA in 2018, which had more participants overall. And the feedback from congress attendees is also positive,” says Dr Andreas Förster, Executive Director of DECHEMA e.V. “We will expand the concept with a view to the next ACHEMA, which will take place in Frankfurt from 10 to 14 June 2024.”

The ACHEMA Congress covered the entire spectrum of chemical process technology and biotechnology. The lectures provided insights into current research and development projects as well as the latest scientific results.

On each day of the trade show, particularly topical issues were dealt with in a separate theme day:

How to build a robust CLEANING VALIDATION process

Exclusive article by pharmaceutical industry global expert Igor Gorsky on the need to establish a comprehensive science and risk based cleaning validation program...

This article looks at surface roughness in relation to pharmaceutical equipment design and the importance this plays for chemical and microbial adhesion...

IMA DIGITAL: The Desire for Innovation

Increasing efficiency, by adopting advanced digital technologies, is the policy that IMA Group has been pursuing for some time through the IMA Digital initiative..

Traceability is fast becoming a necessity

QR Code and traceability are fast becoming a necessity in today’s retail and manufacturing landscape...