The granulation step imparts the suitable powder bulkiness, flowability, and strength required for: an easy handling, a uniform dispensing from the hopper, and to confer the desired strength of the final tablet.

The main snare of such multi-step and labor-intensive granulation process is its unsuitability for the moisture- and thermo-sensitive APIs [2].

Non-granulating, cost-effective, DC methodology is a ‘process of choice’ in today’s high-paced modernized tablet manufacturing arena. The US FDA has provided the recommendations about continuous pharmaceutical processing under the ICHQ8 guideline. This is also called as ‘Process Analytical Technology (PAT).

A pharmaceutical continuous manufacturing is achieved with a real-time process monitoring using PAT tools. These PAT tools include various advanced spectroscopic near infra-red and Raman spectroscopy sensors. PAT sensors are placed inside the instruments for providing a real process monitoring to avoid any process deviations from the set standards or specifications. A DC process has fewer steps than other granulating process. This feature provides relatively easy adoption for a possible continuous manufacturing using PAT sensors.

Certainly, tableting with and without granulation have their unique advantages and limitations. The final formulation features are the main player, which prescribe the choice of a granulating and non-granulating methodology regardless of their advantages and inadequacies.

An important component of USP<1062> such as tabletability profile (tensile strength vs. compression pressure) was used to compare the impact of granulation and non-granulation method on the tablet robustness of the model acetaminophen formulations.Strain rate sensitivity study was also performed at 150 MPa compression pressure and 20, 40, 60, 80, 100 RPM turret speed to study the impact of granulating (wet and dry) and non-granulating methods on the formulation sensitivity to the applied compression speed.

Key Findings of the Study, 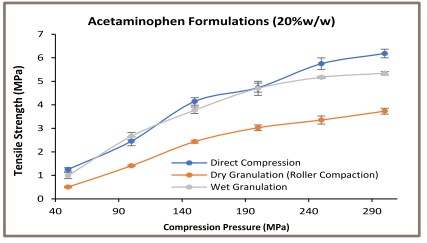 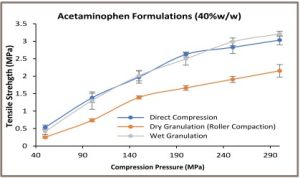 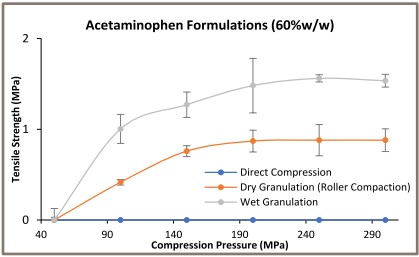 Acetaminophen is known as a poorly deforming elastic material [5]. These findings indicate the wet granulation is a ‘right choice’ of handling elasticity issue of such poorly compressible high-load formulation, regardless of its above-mentioned limitations.The inability of direct compression methodology to form tablets with 60% w/w acetaminophen formulation appears to confirm the study’s hypothesis.

In the second stage, the compression speed sensitivity of the acetaminophen formulations was analyzed by plotting the tablet tensile strength as a function of the tangential velocity (Figure 2). The turret speed of 20, 40, 60, 80, 100 RPM represents the tangential velocity of 209.3, 418.7, 628.0, 837.3, 1,046.7 mm/s respectively, based on 200mm Pitch Circle Diameter (PCD) of Natoli NP-RD30 Tablet Press. The maximum commercial rotary tablet speed is 90 RPM for an 840 mm diameter turret. It translates into approximately 3,958 mm/s tangential velocity. The applied tangential velocity in the present study was 200 mm/s to 1,100 mm/s. 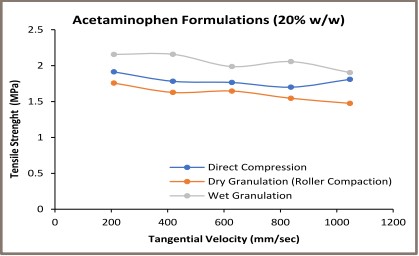 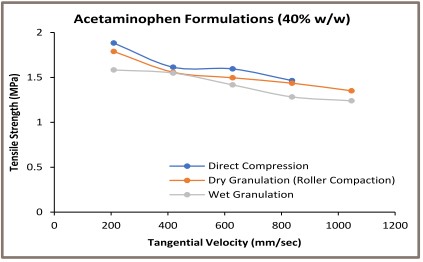 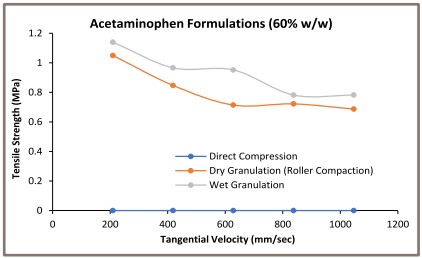 Dr. Rahul Haware is a Pharmaceutical Scientist currently serving as the Director of Scientific Support and New Business Development at Natoli Scientific. His professional and academic expertise is in leveraging Process Analytical Technology (PAT), and Quality-by-Design (QbD) paradigms to develop the DM(3) approach. He was a professor for eight years and has authored several book chapters (3) and peer-reviewed international review and research papers (46). Dr. Haware holds Master’s degrees in Pharmacy and Molecular Biology. He completed his PhD in Powder Compaction Physics at UiT The Arctic University of Norway.

Dr. Devang Patel is a Senior Research Scientist at Natoli Scientific. He uses his experience in resolving or providing guidance on various tableting issues like sticking, picking, etc. to provide scientific and technical support for Natoli’s customers by generating application data for formulation and tablet tooling. Some of his notable academic contributions include peer-reviewed papers on formulation and 3D printing. He holds a PhD and Master’s degree in Pharmaceutical Science from Long Island University, New York.

Robert Sedlock is the Director of Natoli Scientific. He is a leading expert in the tablet compression industry with over 25 years of experience and has authored numerous technical articles and journal publications. Mr. Sedlock is responsible for global solid dosage customer support, training seminars, contract compression services, and continuous research.

Kerry Cruz works as an Office Administrator and Lab Technician at Natoli Scientific, which is an Industrial Machinery & Equipment company. She is an integral part of the Office Operations team within the Operations Department.

Unique and complete ecosystem of technologies